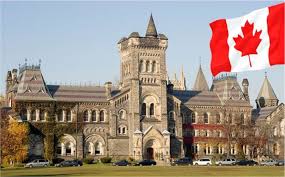 Canada is no doubt a great country that shows excellence in a variety of things, including Universal Healthcare, Safety and Security, a High standard of living, and a world-class education system.

Covering about two-fifths of the entire continent of North America, Canada is home to only about 38 million people, yet, competing favorably with the choicest countries for international studies and research. As released on the 8th of June by the QS World University Ranking 2023 Canada has a total of 30 universities listed.

The ranking is based on university performance including academic and employer reputation, faculty/student ratio, and research citations to aid students to make the best decisions.

Down below is the top ten highest-ranked universities in Canada.

The Western University is located at London Canada, and is ranked as one of Canada’s top research universities with 163 undergraduate programs and 119 post graduate programs. The university has an annual research funding of $235 million and more than 60% of its research publications involve international collaborations. The university is home to renowned research centres such as the Rotman Institute of Philosophy, the Wind Engineering, Energy and Environment Research Institute, the Brain And Mind Institute and the Bone and Joint Institute just to mention a few. At the Western University, students balance academic achievements with opportunities for athletic, volunteer and social engagement, the university is considered as one of the most beautiful campuses in Canada.

The McMaster university has its main campus at Hamilton Canada. The university is one of Canada’s top three research intensive universities with more than 70 centres and institutes including three national Centres of Excellence. The Mcmaster University and has earned an international reputation for creating solutions to the world’s greatest challenges, also, they are the only Canadian host site of a United Nations University (The Institute for Water, Environment and Health UNU-INWEH). The McMaster University has 95 undergraduate programs and 76 postgraduate programs, the university celebrates diversity and welcomes international perspective, it is located at the heart of one of the most vibrant, innovative and multicultural regions of North America.

The University of Alberta has its main campus which is North Campus at Edmonton Canada, and four campus namely Campus Saint-Jean, Canada, Augustana Campus, Canada, South Campus, Canada and Enterprise Square, Canada. The University ranks among the world’s top 130 universities in the QS world university ranking 2023 and is one of the world’s leading public research-intensive universities having a reputation for excellence in sciences, business, humanities, engineering, health sciences and creative art. The university of offers 216 undergraduate programs and 109 postgraduate programs in 18 faculties. The university is home to world leading facilities such as Canada’s National Institution for Nanotechnology and the Li Ka Shing Institute of Virology also the university houses over 40,000 students including over 7,000 international students in a supportive and multicultural atmosphere within a vibrant research environment.

Founded in 1827, the University of Toronto has evolved into Canada’s leading institution of learning, discovery and knowledge creation. The University has its main campus in Downtown Toronto and has three campuses namely Scarborough Campus, Canada, Mississauga Campus, Canada and Downtown Toronto Campus (St George), Canada. The university ranks among the world’s top 50 in the QS world university ranking 2023. The University of Toronto has 8 Undergraduate programs and 175 Postgraduate programs. The ideas, innovations and actions of more than 560,000 graduates continue to have a positive impact on the world, It is one of the best in the world for medicine.

The McGill University has its main campus in Montreal and another in Macdonald Campus, Canada. The McGrill University ranks among Canada’s most prestigious universities, attracting thousands of international students from over 150 countries every year, and the highest percentage of PhD students of any Canadian research university with 400 Postgraduate programs. The university owes its reputation to its 50 research centers and institutes, 400+ programs, rich history and thriving alumni network of 250,000 people around the globe. Graduates are highly sought after by employers, with the following percentages of graduates in education or employment two years after graduation:

92% of all PhD respondents

Montreal also came first in the QS Best Student Cities 2017, a ranking of the most student-friendly cities around the world. Both safe and affordable, Montreal is infused with art and different cultures. Rental costs here are significantly lower than in other major university cities, while many international institutes, pharmaceutical firms, financial companies, and aeronautical firms are based here, providing ample employment opportunities for students.